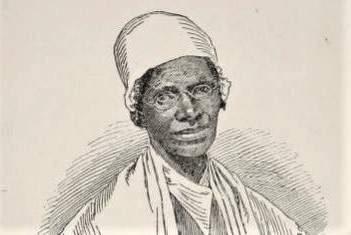 Born a slave in Ulster County, New York around 1779, Sojourner Truth knew how power could be used for evil.  She  passed through the hands of numerous owners, many of them cruel, before she was given her freedom at age 30 when New York State abolished slavery in 1827. She then fought to free her children and was able to get her five-year-old son back after he was illegally sold as a slave and sent to Alabama.

Following a deep religious experience, she became a wandering preacher. In 1844, she joined the Utopian community – The Northamption Association of Education and Industry, a 200 member silk-growing cooperative founded by abolitionists. There she met noted abolitionists such as William Lloyd Garrison and Frederick Douglass.

This led to numerous speaking engagements. Since Sojourner was illiterate, we have to rely on other people’s written record of what she said. In 1850, she dictated her memoir to Olive Gilbert, and it was published by Garrison.

The following is a brief excerpt from The Narrative of Sojourner Truth: A Northern Slave Emancipated from Bodily Servitude by the State of New York in 1828. (pp 111-112) In this example, Truth is addressing a group of ministers on their view of the end of days.

You seem to be expecting to go to some parlor away up somewhere and when the wicked have been burnt, you are coming back to walk in triumph over their ashes– this is to be your New Jerusalem!! Now I can’t see anything so very nice in that coming back to such a muss as that will be, a world covered with the ashes of the wicked.

Besides if the Lord comes and burns–as you say he will–I am not going away; I am going to stay here and stand the fire like Shadrach, Meshach,  and Abednego! And Jesus will walk with me through the fire, and keep me from harm. Nothing belonging to God can burn. any more than God himself; such shall no need to go away to escape the fire! No, I shall remain. Do you tell me that God’s children can’t stand fire? …It is absurd to think so!”

Which is more important the words or how they are said?

Sojourner gave her most famous “Ain’t I a Woman” speech at the Woman’s Rights Convention in Akron, Ohio on May 29, 1851. Journalist Marius Robinson transcribed it and published it in the Anti-Slavery Bugle. According to Leslie Podell’s The Sojourner Truth Project, Sojourner, herself, went over this transcript with Robinson before publication.

As Podell points out, numerous versions of this speech have been published and quoted. In 1863, Francis Gage wrote one of the most well-known versions in which she gave Truth a Southern dialect. The 1875 version of Sojourner Truth’s life story also records her words in this dialect. Though, as can be seen above, this is not represented in the 1851 version of the speech nor in the excerpt from the 1850 Oliver Gilbert Narrative quoted above.

What would Sojourner Truth have sounded like?  Visit the Truth Project and listen to the various video-recordings of women reading the 1851 version. Here is one to start you off…

I welcome your thoughts and comments.