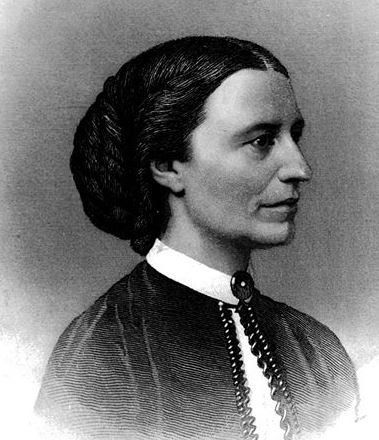 Clara Barton celebrates a birthday this week. She was born on Christmas Day 1821. She was the first woman appointed to government office at the same wage as a man, although her salary was later reduced, and then the job eliminated altogether. During the Civil War she procured food and medicine and carried it to the front herself. Many young soldiers called her the Angel of the Battle Field. After the war she ran the Office for Missing Persons. She also became a vocal advocate for black civil rights and women’s rights. After completing the Lyceum circuit and gaining national fame, she set out for Europe where she worked with the Red Cross. On her return she worked to establish the American Red Cross. In 1907 Clara Barton wrote an autobiography The Story of My Childhood intended for children. She was an extremely quiet shy child but very determined and serious as the following excerpt about working in her father’s weaving mill shows.

I had been taken through the new factory by my brother; had seen these young persons at work; watched the shuttles fly under the deft fingers of the weavers, and felt that there was something I could do. There was no school, I was idle. After a little quiet reflection I astonished the family by announcing my desire to go into the mill. I wanted to weave cloth. At first they tried laughing at me. I was too sensitive to be dealt with in that way. Then reasoning. I was “too small”; it was not a proper thing for me to do. But I was not easily dissuaded. One day in the midst of a family council, my brother Stephen chanced to call. He listened attentively, saw that I was anxious and troubled, and was giving trouble to others as well. At length he spoke. Addressing my mother, he said: “I do not see anything so very much out of the way in the request. I wonder if we are not drawing the lines too tightly on our little sister? A few years ago she wanted to learn to dance; this was denied as frivolous and improper; now she asks to work. She took up a work by herself and did it two years, a work that no child would be expected to do, and did it well. She is certainly a properly behaved little girl, and I cannot understand why we should trouble ourselves or her so much concerning the proprieties of her life. For my part, I am very willing to arrange a pair of looms for her and let her try.” A hush fell on the group. My anxious mother seemed relieved. The big brother had spoken. I crept shyly up under his stalwart arm and kissed his bearded cheek.
The next day a low platform was run along in front of a pair of new, glossy looms, just by the desk of the overseer of the room. A good weaver was given charge to instruct me, and when I stepped upon that platform and looked down upon the evenly drawn warp and the swiftly flying shuttles, and felt that they were mine, I imagine the sensation was akin to that of a young queen whose foot first presses the throne. I was too carefully watched to permit a mistake, and too interested to be tired. Before the end of the week I was able to discharge my instructress, or it is more probable she discharged herself in view of my self-sufficiency. I could scarcely wait in the morning for the bell to call me, early as it would be, and I walked up that long, outside flight of black, greasy stairs and entered that whirring, clashing room with as much pride and satisfaction as I would have entered the finest and most highly embellished schoolroom.

I finished my first week, commenced my second, and went through with no assistance. On Saturday my webs were cut from the looms, examined and pronounced of first quality, showing great care. I took my proud record home. The next day (Sunday), Mr. Samuel Parsons, with the prudent care that could not trust even the watchman too implicitly, went into the mill by himself, ascending to the picker room in the top story, where the light, oiled wool was piled in great quantities. He casually placed his hand upon it in passing, and observing that it felt warm, he plunged his arm in to lift it. The flames enveloped him. He ran at full speed the length of the building to the bell rope. The fire was there almost before him. He gave two strokes, when the flames drove him from the room; they licked down the air shafts and belt holes, lapping up the oil like so much food, as it was.

The perfection of the magnificent fire departments of the present day was far in the future then. In three hours it was all over, and the new North Oxford Satinet Mills were a smoking pile of rubbish, a thing of the past. No heart was heavier than mine. The strong, energetic brothers knew that rebuilding would commence at once, but I mourned without hope.

If ever there were lost or omitted a well-turned joke or a bit of humor by the various members of the Barton family it was clearly an accident, no such omission being ever intended; and thus it was suggested to me, that, as the fire was manifestly a case of spontaneous combustion, could it have been that I worked so fast that the friction set the mill on fire? That joke on me lasted many years. The mill was rebuilt, as well as several others, some to be burned, some to be sold; but by then I had found other occupations more congenial to the other members of the household, it is to be hoped, if not to me.

Clara Barton The Red Cross in Peace and War

Clara Barton in the Civil War