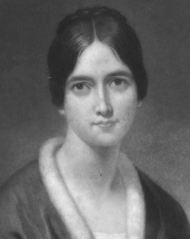 Have you ever heard of Mercy Warren, Esther Reed, Mary Philpse, or Sarah Bache?

Elizabeth Fries Ellet (1818-1877) immortalized these and numerous other women in her ground-breaking work  The Women of the American Revolution in 2 volumes published in 1848. Ellet was a prolific writer who, in addition to translations, poetry, country rambles, and domestic works, focused on women and their role in history, publishing over 20 books including works such as Pioneer Women of America (1852), Queens of American Society, and the first book on women artists Women Artists of All Ages and Countries (1867). She felt that women contributed to history through their emotional support and sentiment and that this was the reason their contributions had been ignored.

A friend of Margaret Fuller and part of the literary circle that included Edgar Allen Poe, Ellet is best remembered for her own emotional contribution to history. Apparently besotted with Poe, she sent him flirtatious letters which Ellet later demanded back. Poe supposedly returned them, but Ellet set her brother on Poe who threatened to kill him. Poe, in fear, sought a pistol. Another writer Frances Osgood had also sent Poe amorous letters, and Ellet became involved trying to get these letters back as well. Osgood’s husband asked for an apology. In making it, Ellet put all the blame on Poe, calling him intemperate and insane. Her friends and she spread this rumor until it was taken up in the papers and became part of Poe’s persona. It is suspected that she was the anonymous writer who sent letters about Poe’s affairs to his wife. Certainly, Virginia Poe believed this, claiming on her deathbed, “Ellet had been her murderer.”

Here is an excerpt from the preface of Women of the American Revolution in which Ellet lays out her view of women’s role in history:

All Americans are accustomed to view with interest and admiration the events of the Revolution. Its scenes are vivid in their memory, and its prominent actors are regarded with the deepest veneration. But while the leading spirits are thus honored, attention should be directed to the source whence their power was derived—to the sentiment pervading the mass of the people. The force of this sentiment, working in the public heart, cannot be measured; because, amidst the abundance of materials for the history of action, there is little for that of the feeling of those times. And, as years pass on, the investigation becomes more and more difficult. Yet it is both interesting and important to trace its operation. It gave statesmen their influence, and armed heroes for victory. What could they have done but for the home-sentiment to which they appealed, and which sustained them in the hour of trial and success? They were thus aided to the eminence they gained through toils and perils. Others may claim a share in the merit, if not the fame, of their illustrious deeds. The unfading laurels that wreathe their brows had their root in the hearts of the people, and were nourished with their life-blood.

The feeling which wrought thus powerfully in the community depended, in great part, upon the women. It is always thus in times of popular excitement. Who can estimate, moreover, the controlling influence of early culture!

Do you agree that women’s contributions to history are different from men’s or is Ellet’s view an artifact of her times?

7 Replies to “Elizabeth Ellet on Women of the American Revolution”