At the age of fifteen Frances Burney (17752-1840), despite the tears of her younger sister, tossed the plays, poems and first novel she had written on to a bonfire. Why? She was consumed with guilt. In 1767 women were not supposed to spend their time writing anything but private letters. Better they perform useful household chores and fine needlework. Luckily, Frances Burney’s resolve to be a proper lady did not last more than nine months at which time she began a journal remarkable for capturing the history and personages of the late 18th and early 19th century.

Over a lifetime that took her from England to France and back to England, she served Queen Charlotte at the royal court during which she witnessed the madness of King George, married a poverty-stricken French émigré who at first served and then was wounded fighting Napoleon, underwent a mastectomy for breast cancer without anesthesia which she duly described in her journal, and proceeded to write eight plays and four novels.

Her novels were immensely popular during her lifetime, appreciated for their

wit and comedy of manners. Her first novel Evelina was praised by Edmund Burke and Dr. Johnson.  Jane Austin was particularly influenced by her writing.

The following excerpt is from the beginning paragraphs of her journal recorded on March 27, 1768 at the age of sixteen.

To Nobody, then, I will write my journal! since to Nobody can I be wholly unreserved – to Nobody can I reveal every thought, every wish of my heart, with the most unlimited confidence, the most unremitting sincerity to the end of my life! For what chance, what accident, can I end my connections to Nobody? No secret can I conceal from No-body, and

to No-body can I be ever unreserved. Disagreement cannot stop our affection. Time has no power to end our friendship. The love, the esteem I hold for No-body, No-body’s self has not the power to destroy. From No-body I have nothing to fear, the secrets sacred to friendship. Nobody will reveal when the affair is doubtful. Nobody will not look to the side least favorable –

I will suppose you then, to be my best friend; tho’ God for bid you ever should! my dearest companion – and a romantik Girl for mere oddity may perhaps be more sincere – more tender – than if you were a friend in propria personae – in as much as in imagination often exceeds reality. In your Breast my errors may create pity without exciting contempt; may raise your compassion, without eradicating your love.

From this moment then, my dear Girl – but why, permit me to ask, must a female be made Nobody? Ah! my dear, what were this world good for, were Nobody a female? And now I have done with preambulation.

Have you ever destroyed something you have written? 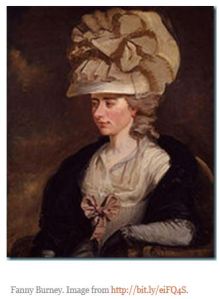