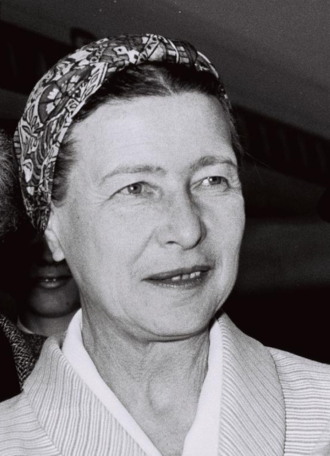 “I am too intelligent, too demanding, and too resourceful for anyone to be able to take charge of me entirely. No one knows me or loves me completely. I have only myself”
― Simone de Beauvoir

The French feminist and philosopher Simone de Beauvoir was born in Paris in 1908. She is most known for her treatise The Second Sex in which she attacked the myth of the eternal feminine. Her novels addressed existential themes. The following excerpt is from All Men Are Mortal.

I held out my hand. Because of the strength of her love, despite the past, despite the future, I once more found myself completely present, completely alive for the first time in centuries. I was there, a man loved by a woman, a man with a strange destiny, but a man of this world. I touched her fingers. Only a word and that dead crust would have caved in, the fiery lava of life would have begun flowing again, the world would once more have had a face. There would have been expectations, joys, tears.

“Let me love you,” she said very softly.

A few days, a few years, and then she would be lying on a bed with a shriveled face. Colors would become jumbles together, indistinguishable, the sky would fade, odors would freeze up. You’ll forget me. Her face was frozen in the middle of an oval painting. There weren’t even any words any longer with which to say: “She is not here.” Where was she not? I could see no emptiness around me

The character speaking in this excerpt is immortal and will not risk love. But for us who we are mortal is love worth the risk?