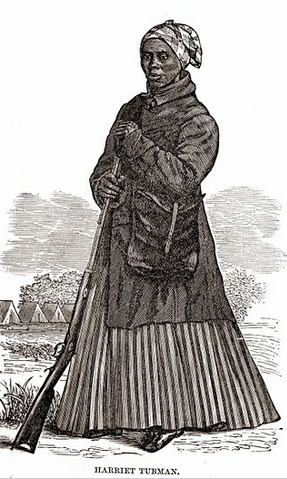 Harriet Tubman (1822-1913) was recognized as a hero in her own day. An escaped slave, she repeatedly went back to the south and led other slaves to freedom, saving thousands. Outspoken and fearless, she was a passionate and influential speaker in both the abolitionist movement and in the fight for women’s rights.

I have chosen to share two renditions of her words that date back to when she was alive, although even these have been filtered down to us. The first was written in 1856 by Benjamin Drew in the North-side View of Slavery: The Refugee or the Narrative of the Fugitive Slave. This volume is a collection of statements by slaves who had fled the south. Here is Harriet’s entry:

I grew, up like a neglected weed, — ignorant of liberty, having no experience of it Then I was not happy or contented: every time I saw a white man I was afraid of being carried away. I had two sisters carried away in a chain-gang, — one of them left two children. We were always uneasy. Now I’ve been free, I know what a dreadful condition slavery is. I have seen hundreds of escaped slaves, but I never saw one who was willing to go back and be a slave. I have no opportunity to see my friends in my native land. We would rather stay in our native land, if we could be as free there as we are here.’ I think slavery is the next thing to hell. If a person would send another into bondage, he would, it appears to me, be bad enough to send him into hell, if he could. (p. 16 )

In 1869 Sarah H. Bradford wrote a memoir, Harriet Tubman, sanctioned by Harriet and intended to raise funds for her. Published in Harriet’s hometown of Auburn, New York, Sarah’s small volume consisted of letters written to Harriet, tickets Harriet had been gifted, and numerous stories told her by Harriet. It is one of our main sources on Harriet’s life.

Sarah Bradford, as opposed to Benjamin Drew, has chosen to render her words in the uneducated dialect associated with slavery.

…she started on her journey, “not knowing whither she went,” except that she was going to follow the north star, till it led her to liberty. Cautiously and by night she traveled, cunningly feeling her way, and finding out who were friends; till after a long and painful journey she found, in answer to careful inquiries, that she had at last crossed that magic “line” which then separated the land of bondage from the land of freedom; for this was before police were commanded by law to take part in the iniquity of slavery, and aid in taking and sending back those poor hunted fugitives who had manhood and intelligence enough to enable them to make their way thus far towards freedom.

“When I found I had crossed dat line” she said, “I looked at my hands to see if I was de same pusson. There was such a glory ober ebery ting; de sun came like gold through the trees, and ober the fields, and I felt like I was in Heaben.”

But then came the bitter drop in the cup of joy. She said she felt like a man who was put in State Prison for twenty-five years. All these twenty five years he was thinking of his home, and longing for the time when he would see it again. At last the day comes—he leaves the prison gates—he makes his way to his old home, but his old home is not there. The house has been pulled down, and a new one has been put up in its place; his family and friends are gone nobody knows where; there is no one to take him by the hand, no one to welcome him.

“So it was with me,” she said. “I had crossed the line. I was free; but there was no one to welcome me to the land of freedom. I was a stranger in a strange land; and my home, after all, was down in Maryland; because my father, my mother, my brothers, and sisters, and friends were there. But I was free, and they should be free. I would make a home in the North and bring them there, God helping me. Oh, how I prayed then,” she said; “I said to de Lord, ‘I’m gwine to hole stiddy on to you, an’ I know you’ll see me through.”(p. 20 – copied verbatim from the original)

While we may never know Harriet Tubman’s actual words, we can feel her passion and longing in the words that we do have.

How important is it to know the actual words a famous person has said? Do you feel you know Harriet from these filtered words?