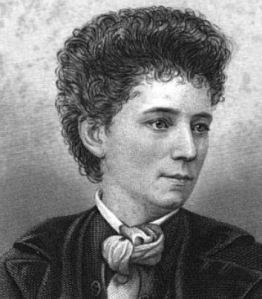 Victoria Claflin Woodhull, the first woman candidate for the presidency of the United States, ran for office in 1872, sixty years before women had the right to vote. The first woman stockbroker, opening a brokerage firm on Wall Street with her sister in 1870, and first woman newspaper publisher, Woodhull was born poor, received only three years of formal schooling, and survived a succession of bad marriages, rising to become in the post-Civil War period influential among the wealthy of New York. In 1871 she addressed the House Judiciary Committee arguing women already had the right to vote as granted in the 14th and 15th amendments.

Woodhull was at first loved and then later reviled by Susan B. Anthony, Elizabeth Cady Stanton, and other leaders of the woman’s suffrage movement. Her belief that women should have an equal role in a sexual relationship and her attack on Henry Ward Beecher for infidelity was seen as outrageous during the male-dominated Victorian era when middle and upper class women were not supposed to feel sexual desire. In 1875 she moved to England where she married and continued to pursue publishing, speechmaking, and an avid interest in improving agriculture.

While Woodhull remains more remembered for her bold speech on sexual relations and “free love”, her ideas about government as expressed in numerous speeches and editorials and published in her 1872 book The Origin, Tendencies, and Principles of Government or a Review of the Rise and Fall of Nations  were radical for her time, and remain relevant today.

Here is Victoria Woodhull’s take on the role of government in the lives of those in need, something she, as the sixth child of an illiterate mother and a snake-oil salesman and as wife to two dead-beat husbands, was eminently familiar.

There is another class of individuals who, either from circumstances beyond their control, from indolence, from incapacity, from settled habits or from perverseness, do not perform sufficient labor to maintain themselves and families in a condition that renders them useful members of society. Society suffers more or less from all the different representatives of this class. They must live, and society must, in some manner, furnish the means to them of living. If it is not earned, it is begged or stolen. There are those who, being too honest to steal and too proud to beg, suffer untold privations. All who would cannot obtain remunerative occupation, or that which they are suited to perform. To all of these as members of society, as part of the people, government owes a duty. Society, of which they are part, owes them the necessities of life, even if it be compelled to force them to earn them. It cannot be made the duty of individual members of society to look after the amelioration of these conditions. It is a general condition growing out of the relations of all its members, and hence becomes a governmental function, not only so far as they, as a class, are concerned, but also to protect individuals of other classes from being made to bear the burdens of them, either by voluntary contributions or from the impositions of beggary and theft. Every one who has attained the proper age and is possessed of moderate health, is capable of performing sufficient service to support him or herself, and by so doing is a useful member of society, because contributing to the sum total of its production. If he cannot obtain employment, society should supply it.  Excerpted from the Origins, Tendencies and Principles of Government  p. 107

Who is Victoria Woodhull?