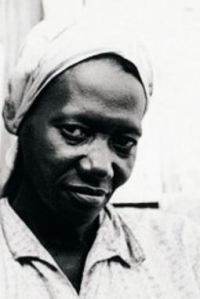 “A woman’s tongue is a candlewick. It is always burning.”

Carolina Maria de Jesus (1914-1977) spent most of her life in a favela in Sao Paola Brazil. To support her three children she collected cardboard and other trash, but many days her children had little to eat. She attended school until she was eight years old where she discovered the drive to write and began to keep a daily journal. In 1958 Audalio Dantas, a reporter,  accidentally learned of her writing and published excerpts in the newspaper. In 1960 her journal was published as a book Quarto de Despejo or The Garbage Room but released here in the US under the title Child of the Dark. The book became a best seller in Brazil. Sudden fame brought wealth but also cultural and social dislocation because she was outspoken and unwilling to act the way educated whites and the media wanted her too. She died in poverty, forgotten, buried in a pauper’s grave. The following journal entries are excerpted from Child of the Dark.

I lit a fire, put water on to boil, and started to wash the dishes and examine the walls. I found a dead rat. I’d been after him for days, and set a rat trap. But what killed him was a black cat. She belongs to Senhor Antonia Sapateiro.

The cat is a wise one. She doesn’t have any deep loves and doesn’t let anyone make a slave of her. And when she goes away she never comes back, proving that she has a mind of her own.

If I talk about a cat it is because I am happy that she has killed the rat that was ruining my books.

I went out with Joao and Vera and Jose Carlos. Joao took the radio to be fixed. When I was on Pedro Vicente Street, the watchman at the junk yard called me and said that I was to go and look for some bags of paper that were near the river.

I thanked him and went to find the sacks. They were bags of rice that had rotted in the warehouse and were thrown away. I was shocked seeing that wasted rice. I stared at the bugs that were there, and the cockroaches and the rats that ran from one side to another.

I thought: Why is the white man so perverse? He has money, buys and stores rice away in the warehouse. He keeps playing with people just like a cat with a rat.

One Reply to “Carolina Maria de Jesus on Rats and Cats”